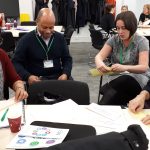 Due to the COVID19 Pandemic we are not hosting a Strategic HR Network Meeting in 2020.

Last year, with speakers from Breckland Training, Noble Training, the LGA and London Council’s, delegates got involved in a number of sessions with development at their heart.

David talked about the SE Challenge and some benefits to be gained for participants….

Christina How won the Best CEO 2019 award March. She shared her personal experiences and what she has gained from this event personally and professionally.

At that time, Christina worked in a joint Comms Team for East Hampshire District Council and Havant Borough Council. She didn’t put herself forward but agreed to participate agreed, recognising it was out of her comfort zone. She barely knew the rest of her team beforehand.

Christina was nominated by her team to be the CEO – again, out of her comfort zone but she embraced the opportunity and moved into the day with enthusiasm. It was a hectic day and just when she thought she could relax, there was one more personal challenge…

Her name was called as the winner of ‘Best CEO’. She recalls making it on stage and feeling her knees shaking so much when she went to accept her trophy!!

Fast forward to today… Christina is recounting her experience and where it has led her – with no shaking knees! She is now a Digital Content and Online Comms Officer for the LGA in London – an opportunity she explored because she took part in the SE Challenge. She has grown in self-confidence and is now more focused on where her career can take her and is more open to stepping outside of her comfort zone to grasp opportunity with both hands. A long day but worth every exhausting minute.

For those who are relatively new into the working world and an opportunity to network with other apprentices. No teams – just individuals. The day will develop key skills required to succeed in the workplace – team work, presentation skills, time management, prioritisation and political awareness.

Mentors are embedded into each team session to mentor and assess individual performance and give immediate feedback to maximise learning at every opportunity. Participants will be grouped into teams and roles will be assigned to each person at the level new entrants to the workplace will expect to stretch them.

Each participant will receive their own post-event feedback report to help them identify strengths and reflect on areas for growth.

For more information about the South East Apprenticeship Challenge happening in March 2020 see our Event page.

Our annual networking event would not be complete without an update on the NJC for Local Government Services pay negotiations. Harry summarised the situation so far.

The National Employers met on 5 November 2019 and unanimously decided that they would not make a decision about a pay offer given the implications of the forthcoming General Election on 12 December. There will be no offer yet for Craft Workers, Chief Executives or Chief Officers as these follow the outcome of the Green Book negotiations.

At the time of the event the Parties had not released their manifestos but based on what has been said to date the following are potential impacts:

Conservative Government: committed to £10.50ph National Living Wage for all over 21’s by 2024
A one year pay deal might be possible. However, given that the likely position of the National Employers will be significantly lower than that the Unions are asking for, these negotiations are likely to be protracted and it may get to the point where a two year deal needs to be agreed to allow time to work on what will inevitably follow. Even with a 2% – 3% pay increase each year the bottom scp of the scale will not reach the target of £10.50 by 2024. This means that there will need to be a reconfiguration of the pay spine, similar to that for 2019, at some point in the coming years.

Labour Government: committed to £10ph Minimum Wage for all from April 2020
This means an immediate reconfiguration of the pay scale would be required.

Liberal Democrat Government: committed to an independent review on achieving a ‘genuine’ living wage. The voluntary Living Wage Foundation rate is currently set at £9.30ph (outside London) and is calculated using the cost of achieving the minimum income standards. This doesn’t pose an immediate challenge for the pay negotiations but may in the future.

Any other outcome may lead to a longer period of uncertainty while the National Minimum and Living Wage policy position is determined.

To keep up to date on the developments in the National Pay Negotiations please see our website.

With regards the Term Time Only (TTO) guidance, Harry reiterated that the guidance contained within Part 4, para 12.4 is guidance only and is not required to be implemented. If you are satisfied that your way of calculating annual leave for those working TTO ensures they receive the minimum of 5.6 weeks leave, you can continue to use your approach. For clarity, the outcome of the Harper Trust case applies to statutory leave only. Therefore, the calculation in the guidance is compliant.

The next section of TTO guidance that will be released will cover the issue of Sickness Absence and Pay for TTO workers. It is a highly complex area and while the Unions have convinced the Employers Side that the current approach is not lawful it will be some time before this guidance is issued.

Coaching – How can it work best in your organisation? – Sue Noble, SEE Associate

Well actually it was lots of planes – paper planes as Sue led a fun and interactive session on the use of coaching in the workplace. A number of activities took a practical approach in exploring similarities and differences between training, mentoring and coaching, the impact of these approaches and how to use formal and informal coaching to the best effect in the workplace.

For more information please see Sue’s slides from the day.

Nigel gave an overview of the data currently requested by the LGA and explained it was important as the LGA are tasked with formulating policy positions for the Local Government Sector and lobbying Central Government on their behalf. The LGA is working towards publishing a timetable of when data will be requested but they are keen to work with Regional Employers Organisations to reduce the need to double, or even triple, report data.

Steve gave his experience of introducing a series of metrics in a London Borough. It is often a long journey to imbed the value of analysing data, but first steps are to decide where you want to get to, what you are currently collecting and why.

He demonstrated how he had used data to generate score cards for various aspects of the HR and Council function. Difficult areas such as Social Care had their scores adjusted to take account of the profession wide challenges. The Council could understand the areas to target with their interventions. Of particular interest was ranking managers by effectiveness using the data. It correlated with areas where the Senior Management Team were observing lower performance levels.

Steve’s presentation covers his approach in detail, plus he shared a HR Metrics Maturity Model.

As Epaycheck nears the end of its lifespan, SEE are working very closely with London Councils to provide a more sophisticated and improved system for pay benchmarking – also including HR and Workforce Metrics. Tessa demonstrated the reporting functionality of the new system InfiniStats showing how easy it is to run reports as well as the usability of the reporting function to produce bespoke, personalised reports.

Much of the data analysis is pre-programmed into the reporting function so reports you run will already have a basic level of analysis ready for you to add whatever further information you wish.

For more information about the South East’s new Benchmarking Tool please email us.